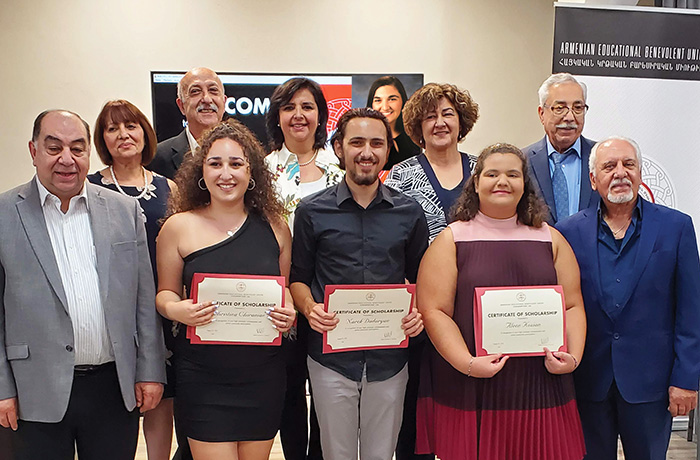 After the war in Artsakh and due to the global economic and social crisis facing Armenian communities worldwide, the Armenian Educational Benevolent Union Scholarship Fund Committee decided to extend its reach beyond the boundaries of the United States and offer scholarships to college students in Armenia and Lebanon as well.

On August 13, 2021, and during a visit to Armenia, founding member Mr. Khachig Keshishian presented four recipients with their scholarship awards.

On August 18 and during a visit to Lebanon, founding member Mr. Garo Bekarian presented two recipients with their scholarship awards. The event held at the AEBU center in Beirut was attended by the AEBU chairman Mr. Aram Malian, Sahaguian-Levon Meguerditchian College principal, Mr. Nazo Jerejian, and several representatives of the Armenian Educational Benevolent Union in Lebanon. The scholarship awards were presented to:

Both recipients are graduates of the Sahaguian-Levon Meguerditchian College operated by AEBU in Lebanon.

To qualify for the AEBU Scholarship Award, applicants must be of Armenian descent, be academically accomplished, and above all, be involved in the Armenian community. All our recipients completed these requirements and even at this young age, have proven valuable participants in the different aspects of Armenian life in their respective communities.

Support Us on Amazon